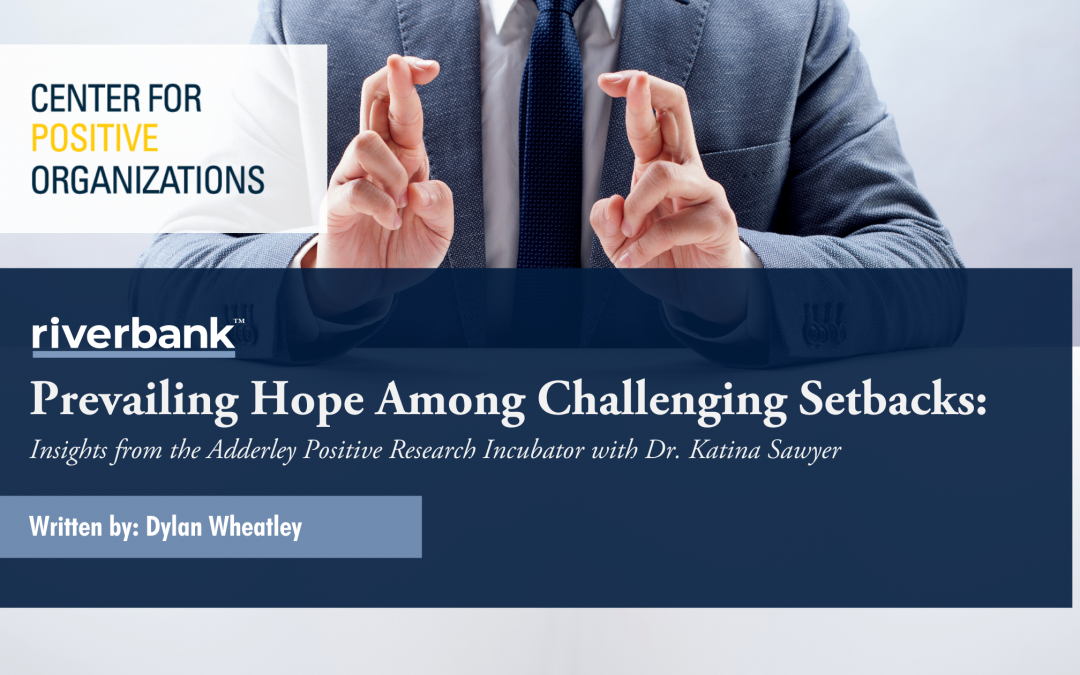 Achieving success comes with challenges, especially when the end goal is ambitious. Light for the Future, a residential rehabilitation home for survivors of commercial sex exploitation, is an organization with a particularly ambitious goal: rerouting people’s lives. At a Center for Positive Organizations Adderley Positive Research Incubator, Dr. Katina Sawyer, a researcher at The George Washington University, shared how hope emerged as a core part of the Light for the Future culture, even amidst the most challenging setbacks.

The Life Cycle of Hope

Through ethnographic research at Light for the Future, Dr. Sawyer and Dr. Judy Clair categorized the life cycle of hope in organizations into four phases: Hopes Running High, Harsh Realities Take Hold, Disappointed Hopes Lead to Rock Bottom, and Hope on the Rebound.

The first phase, Hopes Running High, is easy to imagine. At Light for the Future, residents and staff alike were excited about what the future might hold during this phase. During the second phase, Harsh Realities Take Hold, the objective was often questioned. In this particular case, some residents relapsed, and a fight broke out.

Hope guided people back on the course of the shared vision after the second phase. However, Dr. Sawyer and Dr. Clair discovered an additional test, a third phase where Disappointed Hopes Lead to Rock Bottom. In the case of Light for the Future, the loss of an important role model sent wavelengths of disappointment through the program’s staff and residents.

The last stage, Hope on the Rebound is the “breath of fresh air.” The hopeful narratives observed during the first phase resurface, reinvigorating people’s commitment to their goal. In this case, it was because new residents came in who were achieving their goals.

A Culture of Hope

This cycle of hope is applicable to any organization facing challenges. Take AirBnb. Hope Ran High when Joe Gebbia and Brian Chesky found a way to cover their rent. They accomplished this initial goal by renting out air mattresses in a loft, eventually starting airbedandbreakfast.com with Nathan Blecharczyk. After three launches – one even at SXSW – Harsh Realties Took Hold: their customer base was capped at a whopping two. This only got worse. By the summer of 2008, Hopes Lead to Rock Bottom: they were in debt and broke, failing to secure much-needed cash from investors. The founders scrapped together much-needed cash selling cereal boxes–fittingly reading, “hope in every bowl” – at the 2008 DNC where hope was the center of Barack Obama’s campaign. These cereal boxes rebounded the company, enabling them to secure their first VC donor. Skipping many years down the line, Airbnb recently surpassed the market cap of Hilton and Marriot combined.

Organizations have to carefully attend to stories that are told about unfolding events and the emotions that result, in order to keep hope alive. Hopeless stories and emotions can catch on quickly, making hope cultures unstable. If they are managed with care, hope can prevail. As Dr. Sawyer shared from one of Light for the Future’s patients: “The pain you feel today will be the strength you feel tomorrow. For every challenge encountered, there is an opportunity for growth.”

This story is a collaboration between Riverbank Consulting Group and the University of Michigan’s Center for Positive Organizations (CPO), an academic research center dedicated to building a better world by pioneering the science of thriving organizations. It is based on CPO’s Adderley Positive Research Incubator.